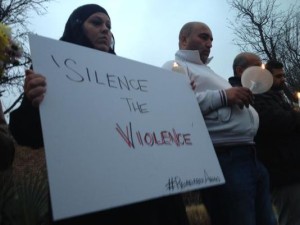 The Dallas Police Department has recently released a video of potential suspects, believed to be involved in the shooting death of Ahmed Al-Jumaili, age 36, outside of the Walnut Bend Apartment complex on Walnut Lane. They are seeking help from the public to identify the men in the video, who were in the area at the time of the murder. An immigrant from Iran, Al-Jumaili had been in the country for only 20 days. He had been trying to get into the country for years, according to his wife, and finally had the paperwork settled. Witnesses say that Al-Jumaili went outside on the morning of March 5th to take pictures of the snow that covered the Dallas, Ft. Worth Metroplex.

Jeff Cotner, Dallas police spokesman, stated from the family that Al-Jumaili had never seen snow before. “[J]ust like all of us, a pretty snowfall brings the child out in us.” So he ventured forth at 12:30am to take pictures before the snow melted away.

Unexpectedly, shots rang out across the neighborhood, leaving Al-Jumaili fatally wounded. He died at Texas Health Presbyterian of Dallas within hours. Witnesses and family members report seeing anywhere from 2 to 4 men during the encounter. When the initial event was released by the media, it was difficult to decipher the timeline of events. Several news sources had to update content throughout the day; one initially claiming that this was a police related shooting.

The Council on American-Islamic Relations became involved in the case almost immediately after the shooting because of the “heightened sense of awareness with regard to hate crimes against Muslims,” states executive director Alia Salem. The Dallas Police have not ruled out the possibility that this was a hate-fueled crime. Some residents report seeing the men enter the apartment complex before the shooting. Just a few minutes later, Al-Jumaili left to take pictures with his wife and brother, and passed the men in question. Witnesses say there was no interaction between Al-Jumaili and the group of men when shots rang out. The four men bailed immediately after the shooting. Security footage around the area show one man with a rifle, running away, and another with a pistol casually walking.

For now, the family of Al-Jumaili is looking to move away, as well as several of their neighbors. There has been an increase in police presence in the neighborhood, but it’s not enough to stem the pain of losing a loved one. A vigil was held outside of the apartment complex over the weekend, with signs held high to “Stop the Violence.”

North Texas Crime Stoppers is currently offering a $5,000 reward for any information that will lead to the arrest and an indictment. Anyone with information is encouraged to step forward to help apprehend the suspects.