Got to Give It Up: DNA

There is an evolution afoot. If staying up on all the criminal justice news is not on your to-do list, then you may have missed it.

In recent days, the Supreme Court of the United States (SCOTUS) has made the news for the decisions it hasn’t made. But recently, SCOTUS made a landmark, while controversial, decision: to allow the continued collection of DNA from felony arrestees, before any criminal charges are brought and to include cases unrelated to said arrest.

Don’t take my word for it. Read the decision, here. If you don’t have much time, I have provided the scanned conclusion of the SCOTUS opinion, below: 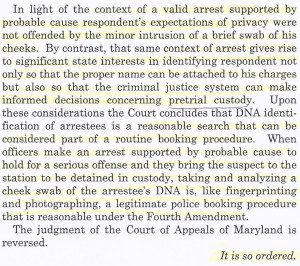 It is so ordered by SCOTUS that being arrested enables police across the country, including Texas, to collect your DNA to find out who you are, and what else you might have done. Before this decision, authorities needed a warrant to compel a DNA sample, and to get that warrant, they needed proof. This decision removes the need for any proof or suspicion, your arrest for another crime is all they need.

This move by the highest court in the country is a leap toward what we can expect from criminal investigations moving forward. There is already talk about DNA being the ‘new’ fingerprints.

Here we are well into the 21st Century, and technology is raising all sorts issues:

Is it fair to collect DNA on an uncharged person?
Can DNA prevent miscarriages of justice?
Is DNA the ‘new’ fingerprint?

Judge for yourself, but, you should know, there are just as many questions on the other side of the equation.

How is collecting a personal DNA sample more invasive than fingerprinting?
What are the chances that collected DNA will be mishandled and used to frame a person?
Will the government retain DNA samples for use in future investigations, whether the person was exonerated or convicted?

These questions are no longer before the court, they decided the law of the land. When judging if they made the right decision, ask yourself:

I believe we are at a time in history, where technology is changing how we live our lives, not for the moment, but permanently: A revolution. I’m sure this discussion came about when law enforcement started collecting fingerprints. I don’t doubt that many of the same questions were being raised then. Speaking from my role in the bail bond industry, I have a hard time being against anything that adds transparency and accuracy to the criminal justice system. Technology as a tool only enhances the way the system works, it can’t harm it. Here in Texas, our legislature just signed a new law requiring prosecuting attorneys to reveal exculpatory evidence to the defense. The reason why the Micheal Morton Act passed? The more than two-dozen, incarcerated prisoners, who were exonerated, in Texas alone, after DNA proved their innocence.

WHAT IF THAT WERE YOU?

The “scales of justice” fall where it should more often than not when there is transparency and accuracy. This move by the Supreme Court only introduces the DNA into the equation before the wrong person is sentenced to waste away in prison. Nothing can be wrong with that. Yes, there is the possibility, a corrupt police detective or department could use the DNA in a way unintended by law. However, we cannot stop progress because of what may happen. What we can do, is put laws in place and act accordingly when someone breaks them.  As an added check-and-balance, we have judicial discretion, which is a critical component of our criminal justice system and why we have judges in the first place.

If I, or a loved one, was the victim of a crime, I would find comfort knowing there are DNA profiles of suspects on file, so the proper offender could be brought to justice. You should be comforted by that too.

Tell us what you think about the issue. Do you think the Supreme Court’s decision was the correct one?